Photos of the Memorial Service

For revision of the Memorial Service, an youtube version can be watched at :

It had been Mr. ILES’ wish to set up an educational fund to support Ying Wa students and alumni to pursue courses on Theology. Contributions to the Mr. ILES Memorial Fund, in lieu of wreaths, would be mostly appreciated. For details, please refer to the attached Obituary. 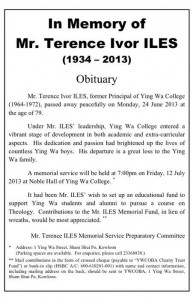