Joint-section Flag-raising Ceremony and College’s Thanksgiving Service will be held on campus on 11 November 2016 at 8:00am and 8:30am respectively.

Detail will be announced soon.

Dear all, Please be informed that the 2016 YWCOBA Annual Golf Tournament will be held on 23rd of November (Wednesday). Same as previous years, the tournament will be held at the South Course of Kau Sai Chau Public Golf Course. Attached please find the enrollment form for your perusal. To enroll, please complete the attached reply slip and send back to Gary Liu Hoi Keung by email : gary.liu@charterwoodcapital.com or by fax : 2317 5310 ASAP and not later than 10th November.
Please feel free to forward this email and to invite other alumni who could be interested in this event. If you have any query regarding this event, please feel free to contact Gary Liu Hoi Keung by email : gary.liu@charterwoodcapital.com or at 9091-9810.  We also welcome any sponsor and prizes donation, etc.
Kind regards,
For and on behalf of
Gary Liu Hoi Keung (1982)
Golf Convenor 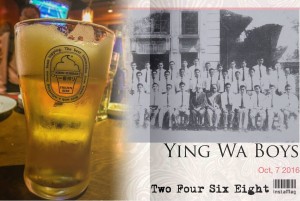 Please kindly note that there will be a happy hour gathering for Ying Wa boys.

We aim to provide a regular casual gathering/networking occasion for old boys at all age group.

Looking forward to seeing you all on the Friday evening. Should you require any further information or have any other suggestions, please feel free to contact one of our Recreation Conveners below.